Help Our Team & All Ukrainians to Protect Own Home. No War in UkraineDonate
Insights and How-to Guides

Why Microservices Architecture Is the Right Fit for Enterprise Project Management

Software as a service, or SaaS, is quickly becoming the dominant model for delivering software over the internet. Gartner predicts that global end-user SaaS spending will reach $482 billion in 2022. With SaaS, applications don't need to be installed or maintained locally. Instead, you access them in the cloud via subscription, only paying for the software and resources you use. And the microservices architecture is a part of this paradigm. But what are the benefits of microservices?

In this article, let’s explore moving to microservices and see what it can bring to the table for an enterprise business. And I suggest starting by learning what microservices are and how they stack up against other approaches.

In essence, microservices are blocks of code that reside in the cloud and perform specific functions. Microservices are connected via application programming interfaces (APIs), so you can easily combine any number of them to receive an app with the features you need. Among other benefits, this approach speeds up production, enables customization, and provides resilience in case of failures.

The idea of assembling apps using only the components you need was quite fresh when SaaS came on the scene in the early 2000s. At the time, software was usually built in one piece — an approach now known as monolithic architecture. But those monolithic apps were a bit too heavy to live in the cloud, and a paradigm shift was imminent.

To help you better understand why microservices and SaaS were inevitable, I'll compare the newer approach to its predecessor. 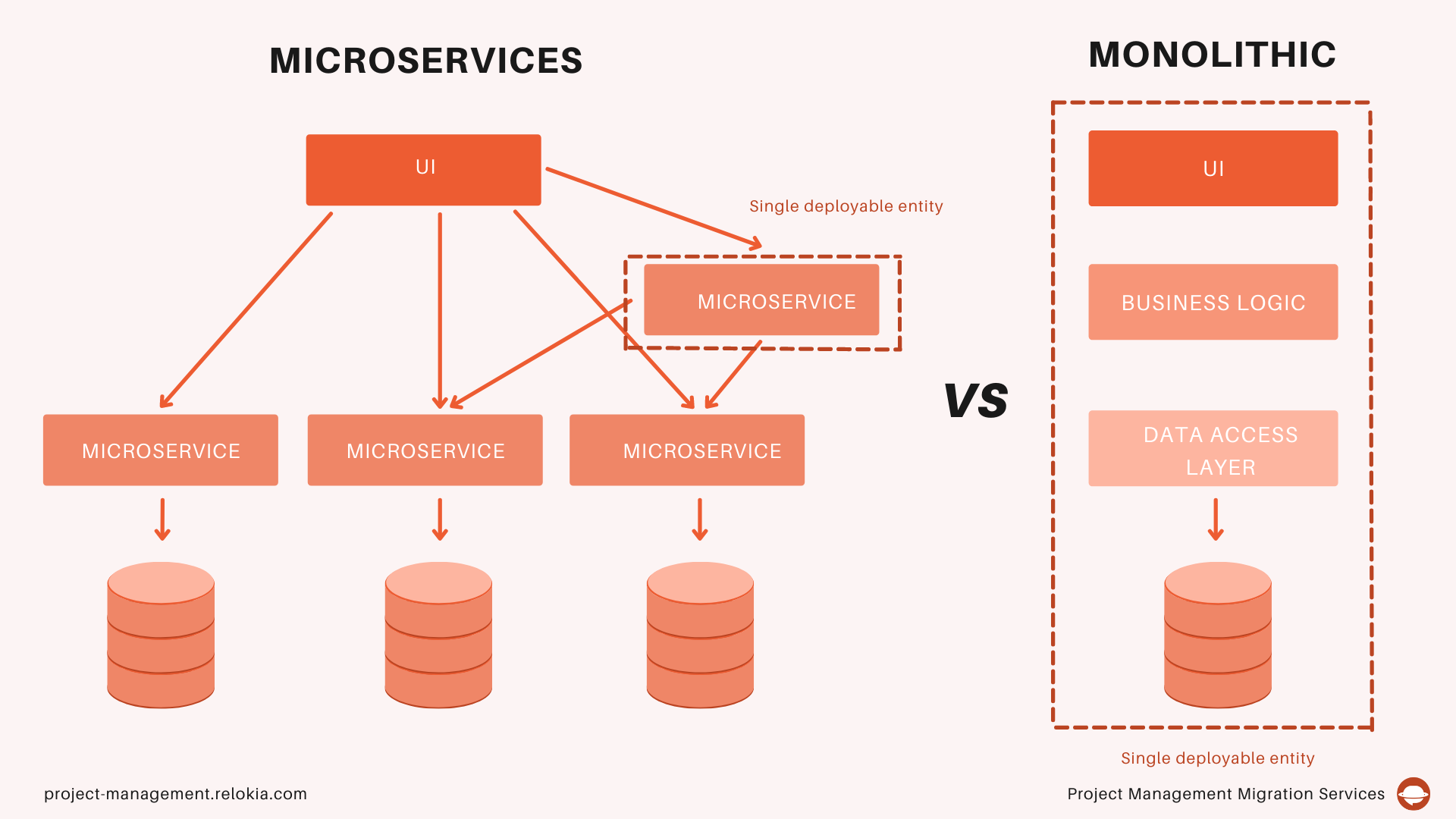 Most likely, you're reading this text because your organization is using applications based on monolithic architecture. This means you have a heavy all-in-one unit of code that takes care of all of your data and functionality. Although it's great for smaller apps and quick proofs-of-concept (POC) rollouts, building software that way isn't necessarily great for projects with complex business logic.

Here are some of the setbacks your organization may face when sticking with monolithic architecture:

That’s why businesses today are increasingly moving from local monolith apps to the SaaS model and microservices. Research suggests that the global microservices market, valued at $831 million in 2020, is growing at a CAGR of 21.7% and is expected to reach $2.7 billion by 2026. It's easy to manage and upgrade modular components, and with standardized APIs in place, interoperability is never an issue.

Now that you have a good grasp of the concept of microservices, it's time to list the advantages of the architecture.

What Are the Business Benefits of Microservices?

Compared to legacy approaches, microservices improve the process of developing and maintaining enterprise software. Here is a quick rundown of the benefits of microservices architecture:

Those are the most notable microservices advantages, which stem primarily from their modular nature and reliance on the cloud paradigm. In addition, your developers will be happy you adopted microservices. Why? Because the move helps decrease the overall size of the codebase and provides access to a broader tech stack.

By now you might think the idea of adopting microservices looks very attractive. However, the architecture does have a few drawbacks that may or may not apply to your particular use case.

What Challenges Does the Use of Microservices Present?

There aren't too many disadvantages of microservices I can think of, but let's name a few for objectivity's sake:

Now that we have the pros and cons out of the way, it's time to get to the topic of when to use microservice architecture for the best results.

When You Need to Switch to Microservices?

Every business is different and requires a custom approach to building and maintaining its software. However, you can't deny the fact that the days of running software locally and on in-house servers are over; and SaaS, cloud computing, and microservices are here to stay.

So, how can you tell that your legacy enterprise software needs a major upgrade? Here's my take.

From my experience, adopting microservices makes the most sense in these situations:

If these points describe your situation, it might be a good idea to prepare for migration to microservices. By the way, remember I said earlier how quick and painless deployment is with this architecture? Let's take a closer look.

What Are Virtual Machines?

Virtual machines (VMs) are software environments that emulate physical computers. Several guest VMs with different operating systems can run on a single physical host. The software treats a VM as a separate computer with its own resources.

On the one hand, this approach provides the flexibility and precise control that the SaaS model requires. Engineers can easily isolate apps and manage resource consumption. On the other hand, the technology is geared towards use with heavy all-in-one apps that need the resources of a separate computer to function.

Containers are a little more agile.

To put it simply, containers are self-sufficient packages of code that include everything a service needs to run. All the libraries, dependencies, binaries — the whole nine yards — are inside a container, along with the service itself. This means you can deploy your microservice in the wink of an eye on any OS, on local servers, or on cloud servers.

Containers use features of the host operating system to efficiently isolate and manage the resources needed for a particular microservice. This ensures a small memory and disk-space footprint, as well as fast boot times. Services can be deployed and scaled instantly, by simply instancing new containers. 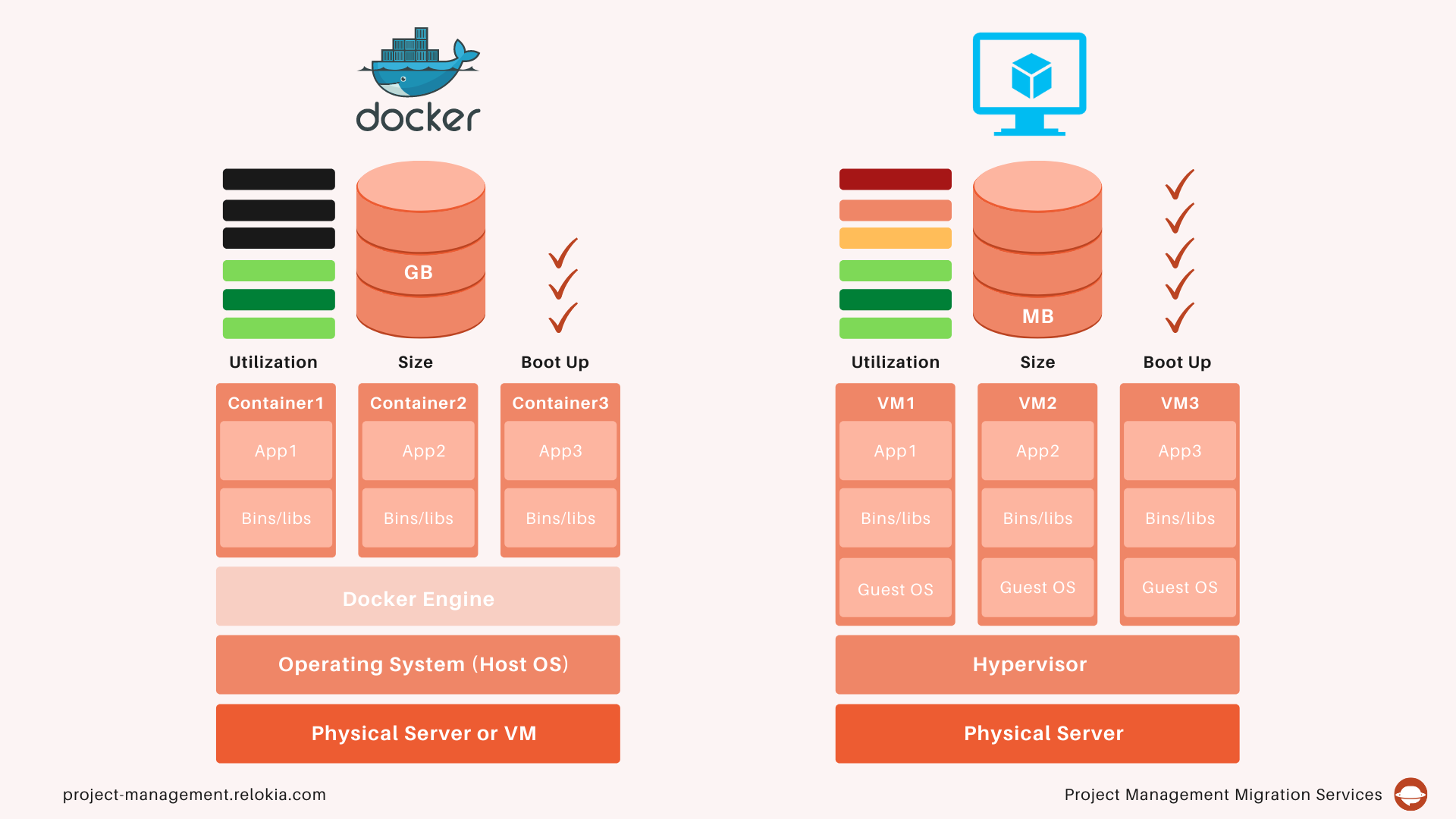 Using a container framework like Docker for microservice deployment offers a lot of perks. In contrast to VMs, containers don't need a full copy of the operating system kernel. Instead, whatever functions and resources Docker requires are shared between Docker and the OS.

Every time you use a VM to initiate an instance of a microservice, you have a delay, because you're essentially starting a separate OS. With the Docker microservice architecture, your services start up much quicker. The difference can be minutes vs. seconds. Not only that — once started, containers consume far less memory, disk space, and CPU power than VMs.

However, virtual machines are more isolated and less environment-dependent, because they contain the OS kernel and all dependencies and libraries needed to run on any platform. Running Windows-based VMs on Linux and vice versa is easily achieved. Security is another strength of VMs.

No matter which strategy you go with, the next section offers real-world evidence that adopting microservices is worth every penny you spend on them.

The microservices architecture has proven its worth for the enterprise business segment over and over again. Many household names in various industries — companies like Uber, eBay, SoundCloud, and Groupon — have gained significant performance benefits and increased their profits by moving from monolith to microservices. In this section, I focus on the journeys of two world-famous companies.

After a major database corruption in August 2008, Netflix knew that its vertical data structure wasn't viable anymore. Later that year, the company began to migrate to a new cloud architecture via Amazon Web Services (AWS).

Overcoming numerous difficulties, over thirty IT teams were able to move the entire operation to microservices by the end of 2011. In the process, they had to simultaneously maintain two platforms, running both in-house and cloud servers. Replicating data was one of the most challenging phases of the migration.

The streaming giant practically pioneered migration for the industry. Even though the idea was initially met with a lot of skepticism, Netflix has been able to scale up drastically. The company reached $24.9 billion in revenue in 2020.

Zalando is a European fashion technology company with over 16,000 employees as of 2021. The first software system Zalando used in 2008 was based on Magento, an e-commerce platform. The company quickly outgrew the potential of the platform and built its own system in 2010 to accommodate increased loads.

After five years of constantly adding functionality and resources, Zalando's engineers realized the system was becoming unsustainable. The huge monolithic codebase had innumerable dependencies and produced bugs at an alarming rate. Maintaining the system became incredibly difficult, and it stifled innovation. So, the company started transitioning to microservices, choosing AWS as their cloud platform and Docker for deployment.

With over 200 microservices currently in use, over seventy different IT teams at Zalando do a great job of synchronizing their work. The company's revenue has grown from 150 million euros in 2010 to almost 8 billion euros in 2020. 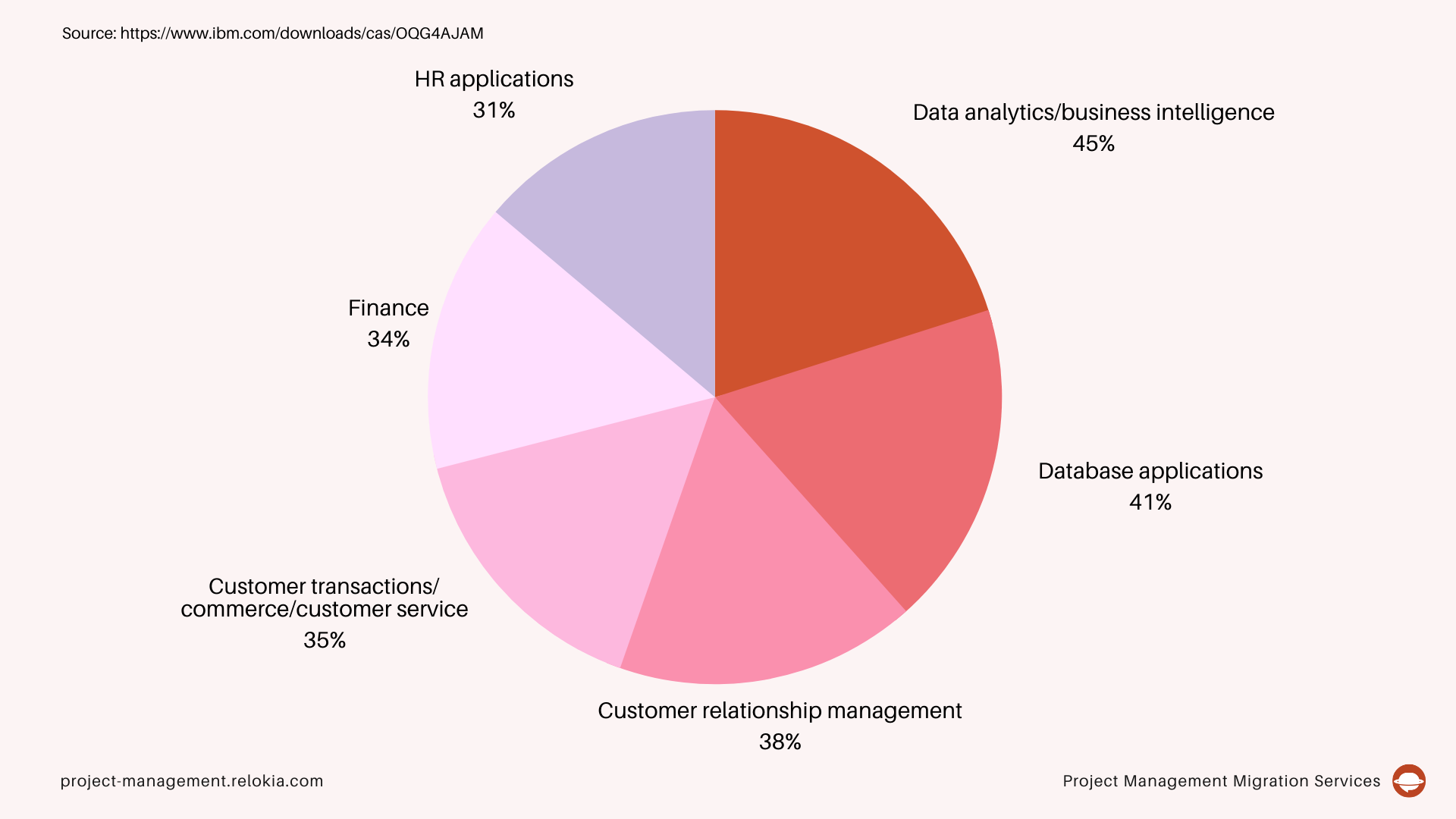 As a modern approach to building enterprise software, microservices have already found their way into multiple domains. According to research by IBM, the architecture has the following levels of penetration:

Those numbers are hardly surprising: the benefits of microservices far outweigh any concerns. In my humble opinion, this architecture will continue dominating the SaaS solutions market, and I wholeheartedly recommend the approach.

I hope you've enjoyed this article. And please remember: if you need to move your product management data to another collaboration tool, our Project Management Migration service is here to help!

Have a data migration in mind? 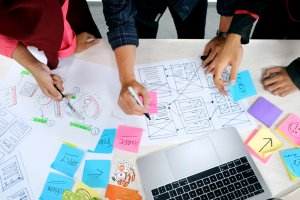 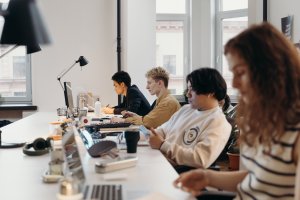 What Is Project Management: All You Need to Know 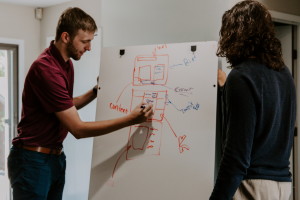 Project Management and Gantt Chart Software: What You Need to Know

We couldn`t find a Platform with that name on our list.
Check the name for typos or leave us a message.
+1-888-866-74-71 Start Chat
Book a Call Chat
%s
— %s
We use cookies to ensure you get the best experience on our website. By continuing, you consent with our privacy and cookie policy
Okay